Tumnus’ Bookshelf: The NarniaFans Book Reviews: The Lion, The Witch And The Wardrobe (Board Book)

Hi everyone! Welcome to the Tumnus Library, where we review all the books written by, about, and inspired by CS Lewis, The Land of Narnia, and The Inklings. For today’s review, we’ll be looking at the new hardcover adaptation of The Lion, The Witch, and the Wardrobe illustrated by Joey Chou!

TITLE: The lion, the witch and the wardrobe (hardback book) 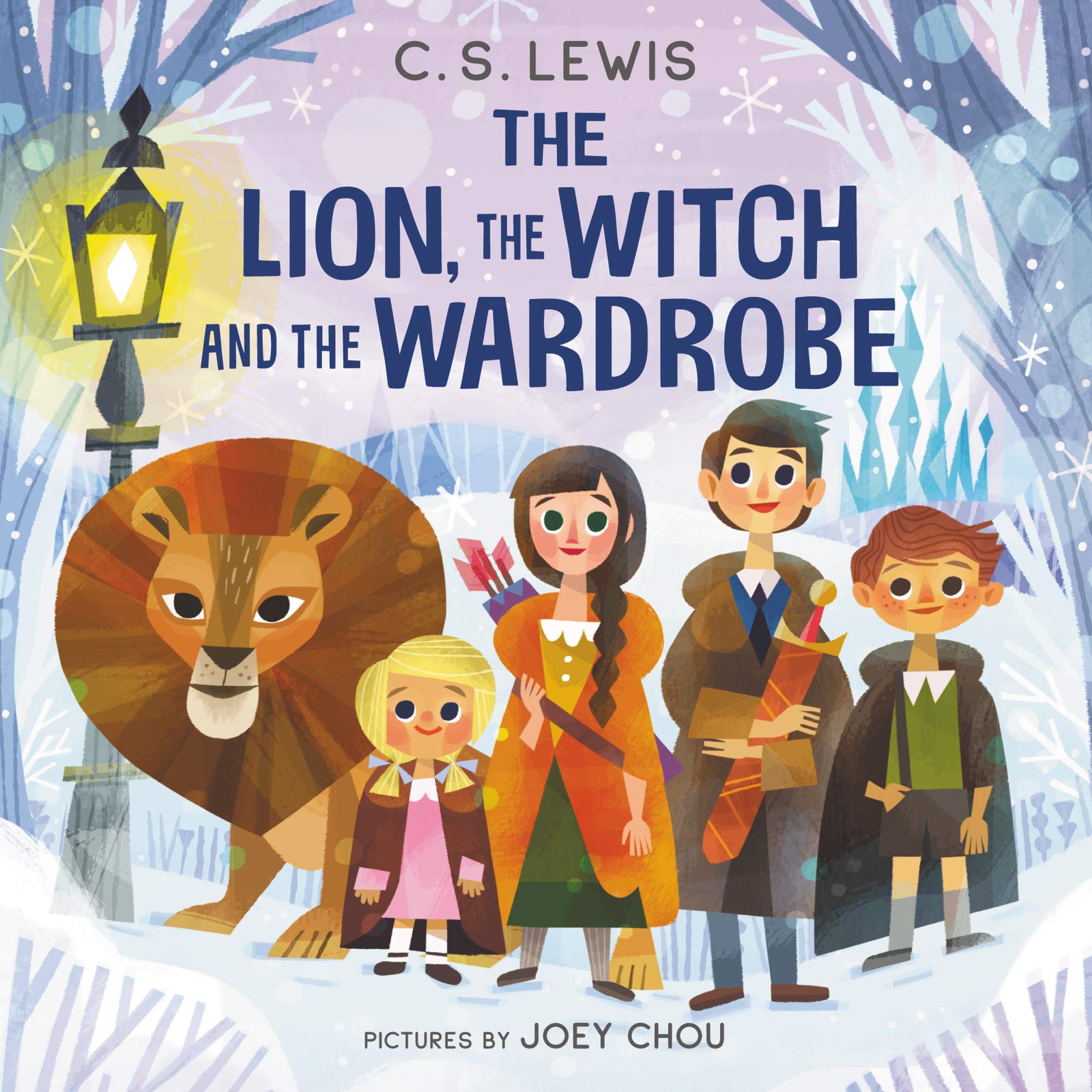 BASED ON THE NOVEL By: CS Lewis

Plot: The beloved fantasy classic The Chronicles of Narnia: The Lion the Witch and the Wardrobe is told in a delightful fairy tale book.

As generations of Narnia fans age and have families of their own for many of them, finding a way to share their favorite stories with young readers can be a Herculean task. While the story of the Lion, the Witch, and the Wardrobe has been adapted into a variety of narratives, including Debra Maze’s World of Narnia series, Humphry Tudor’s exquisite picture book, stories related to the film and the 1995 Robin Laurie graphic novel. For the most part, these accounts have skewed towards older readers, at least 6 years and older, there is not much for the younger friend of Narnia.

It can be very difficult to share a beloved story like this with young readers. The books present many concepts that are difficult for children to understand and even some scary pictures. Ignoring the witch’s pals, the mere fact that the Pevensies are kicked out of their homes because of the air raids on London during WWII can be very frightening for children, especially at a stage of development where they are starting to feel separation anxiety. While the optimal solution would be to simply save the book for when they are older, children’s books that have adapted classic fairy tales or even characters from movies and TV shows like Frozen, Tangled, Moana, Star Wars, Star Trek, and superheroes from DC and Marvel comics.

If these stories can be adapted for young readers, so can Narnia, especially when there are so many elements similar to Frozen or that of Hans Christian Andersen Snow Queen. Imagine my joy and surprise when this book not only came out, but it was in a hardback format. Although there have been hardback books inspired by works of classical literature such as Pride and Prejudice, Romeo and Juliet, The Hound of the Baskervilles, Dracula, Frankenstein, A Christmas Carol, Huck Finn, and The crow many of these books focus on teaching basic concepts like numbers, letters, colors, and sounds. The Lion, the Witch and the Wardrobe is different in this, as are the adaptations of the Petit Livre d’or by Star wars Where Frozen, it’s actually telling the story.

In many ways, the adaptation reminds me of many delightful accounts of Bible stories that I encountered as a child, in which parts of the stories that may be too scary, confusing, or even in the case of genealogies, boring, for a child to hear are omitted, but the essential points of the story have been left untouched. I didn’t need to know at the age of two who fathered whom or why it was important, but the story of Jesus calming the storm gave me comfort and security when I was afraid of thunder, lightning or darkness. Kids won’t know what Turkish delight is, so it’s just called Candy. The professor’s trilemma for Lucy will confuse a young child, so both her argument and even the professor himself are left out. WWII is not even mentioned, but rather focuses on the fun and adventure of the Pevensies in discovering this magical land.

Despite all of this, the book includes Aslan’s sacrifice for Edmund. Much like the children’s Bible story books and their treatment of the death and resurrection of Jesus, this account from Narnia treats Aslan’s sacrifice with the same grace and gentleness to young minds so as not to overwhelm them. give nightmares. This means that the book emphasizes Aslan’s compassion and mercy for Edmund over the witch’s cruelty and brutality, with an emphasis on Aslan’s overall victory instead of the temporary triumph. of the witch.

Joey Chou is no stranger to the world of children’s fantasy tales, with credits that include It’s a small world, Olaf’s frozen adventure, I’m a unicorn, I am a Narwal, and as an artist for films such as the Oscar-winning animated feature Spider-Man: Into the Spider-Verse. Her illustrations for this hardcover book not only have a certain warmth and charm, but a texture, similar to Sunday school flannel graphics. Each character looks distinct and memorable. Aslan looks strong enough, while the beavers look cuddly, Tumnus looks freakish, and the witch literally looks cold and frozen with her blue-purple hues. They attract young readers to the world and keep them engaged.

It’s such a delightful adaptation of Lion, witch and wardrobe. Older readers will certainly appreciate its sweet story and enchanting images. Most importantly, new readers are sure to fall in love with the beloved land of Narnia and its amazing characters. Having read it several times to my goddaughter, I can’t wait to give a copy to my one-year-old nephew!

Five out of five shields

King in Black – Wiccan and Hulkling number 1, Nocterra number 1 and more! – The Geekiary