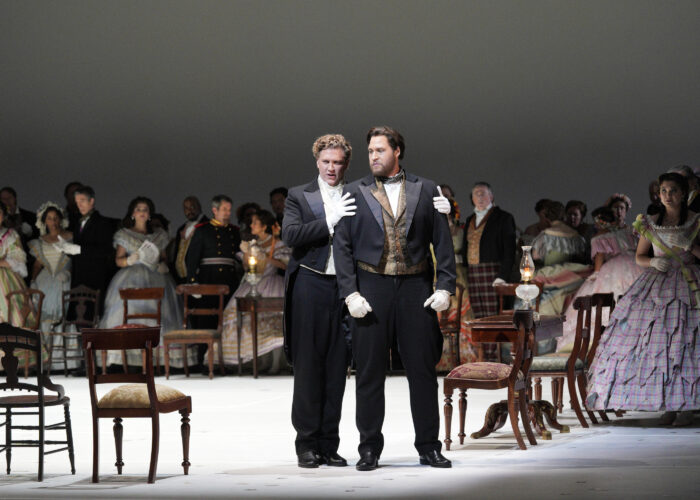 Two good things happened at the San Francisco Opera during the first performance of Tchaikovsky’s “Eugene Onegin” on Sunday, September 25.

The juxtaposition offered a quick, microcosmic glimpse of the passage of time in the world of opera, as older performers, shrouded in glory in recognition of their accomplishments, pass the baton to younger ones full of promise. It was a touching connection to make, especially as the Opera enters its second century amid a rush of centenary celebrations.

Unfortunately, that almost entirely exhausts the good news from Sunday’s opening. In many other respects, this “Onegin” turned out to be a lackluster and underwhelming affair – weakly performed, slow-paced, and staged with an eerily sterile disregard for the work’s tempestuous undercurrent of emotion. .

The timing of this failure was particularly awkward, not only because it fell during the company’s 100th season, but also because it marked the first foray into Russian opera in 14 years, since Mussorgsky’s opera. “Boris Godunov” in 2008. Such an important part of the lyrical repertoire has been absent for a long time.

Of course, company management could not have known when planning for the season that Russia’s invasion of Ukraine would make the issue potentially problematic, but a handful of protesters outside the Opera House, draped in flags Ukrainians, were there to remind them. “The popularization of Russian culture at the moment is appalling and wrong,” read the leaflets distributed to customers. A statement from the company (at www.sfopera.com/onegin) condemns the invasion and affirms its support for Ukraine.

Regardless of the politics, however, it was hard to see Sunday’s performance weigh very heavily in the balance. Instead of the urgency and emotional fervor that “Onegin” can deliver under the right circumstances, it was mostly boring posturing and underpowered vocals.

Based on a novel by Alexander Pushkin, “Onegin” is a misplaced, or at least mistimed, love story. Tatyana, the sensitive and sheltered daughter of a provincial landowning family, develops an instant passion for the main character, which he dismisses in the haughtiest and most condescending way he can muster. When they meet again a few years later, it is Onegin’s turn to love in vain.

But if the plot thus told seems reductive, the splendor of the opera is the tenderness and attentive grace with which Tchaikovsky tells the story. Tatiana’s passion, which she pours into the famous Scene of Letters, is evoked in a tenacious melody that haunts the rest of the score like a psychological pebble in the shoe. The tension between the characters’ inner lives and their public behaviors – the latter encapsulated by a series of vividly drawn dance episodes – is probed with the composer’s trademark insight.

Too little of that, however, came out of this account. Director Robert Carsen’s well-traveled physical production, staged here for the first time by director Peter McClintock, sets the action in a strangely barren abyss surrounded by utterly empty spaces, abandoning the domestic element that is at the heart of the room.

In his company debut, the Greek conductor Vassilis Christopoulos drew on the richly colored playing of the Opera Orchestra, but in the dance sequences he rarely gave the performance rhythmic vitality. Sagging and dragging slow passages; the Opera Chorus, conducted by John Keene, often finds itself unmoored.

Most disappointing were the first appearances of the opera’s two main singers. Canadian baritone Gordon Bintner gave a bland and small, sometimes barely audible performance in the title role. Russian soprano Evgenia Muraveva was no more comely than Tatyana, delivering the scene of the letters in thin, disembodied melodic phrases and often blending into the woodwork of the ensembles.

This left Johnson, as a poet friend of Onegin Lensky, to carry the expressive weight of the drama, and he did so with consummate skill. Especially in his grand aria in Act 2, as Lensky awaits his pointless duel with Onegin, Johnson burst through the numbness of the surrounding activity with a combination of bugle tone and elegant phrasing.

He was superbly, if too briefly, matched by debuting mezzo-soprano Aigul Akhmetshina in a robust and dramatically vibrant turn as Olga, Tatyana’s sister and Lensky’s beloved. Mezzo-soprano Ronnita Miller sang beautifully as always the nanny of the sisters.

Finally, Furlanetto appeared at the end of the opera as Prince Gremin, Tatyana’s future husband, to evoke memories of his long and legendary career. In San Francisco, it began with Ponchielli’s ‘La Joconde’ in 1979 and continued with more recent triumphs in Verdi’s ‘La Joconde’.attilaand Mozart’s “Così Fan Tutte”.

At least, we can hope that this “Onegin” has broken the dam on Russian opera in San Francisco and that other works can follow it in the seasons to come. And in the meantime, we can expect Johnson’s quick return.