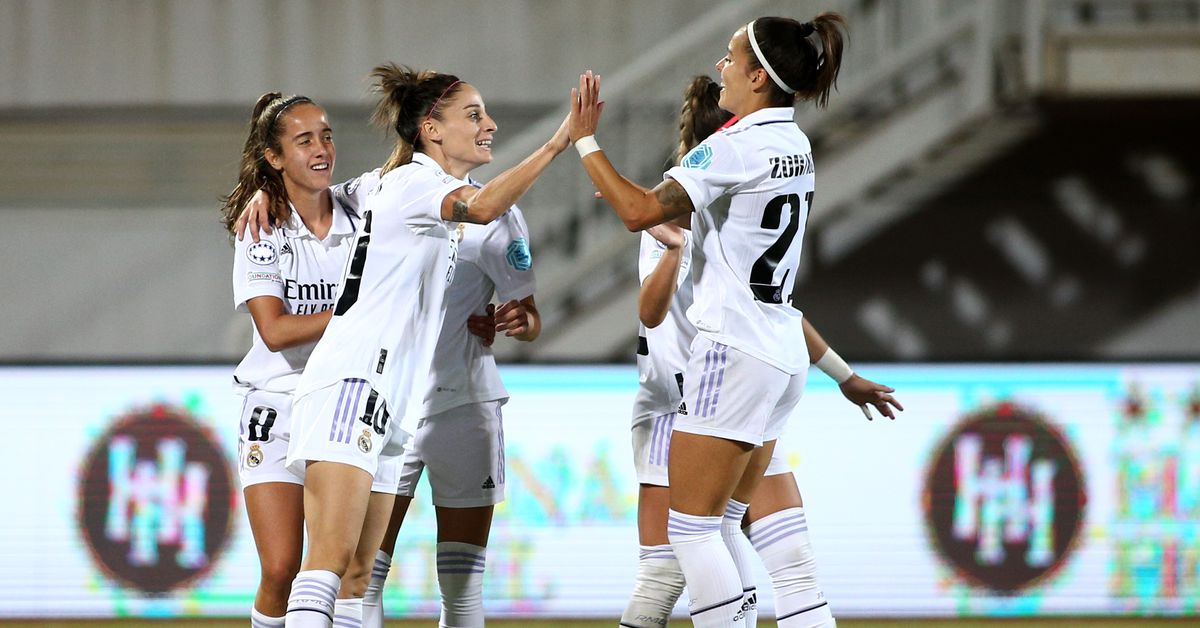 Real Madrid secured 8 out of 8 wins to start the 2022/23 season, beating Albanian side Vllaznia 2-0 in their opening game of the UEFA Women’s Champions League group stage.

Vllaznia defended extremely well in the first half, limiting Real Madrid’s offensive and keeping the score at 0-0. Although Las Blancas dominated the game with possession and continuously breached the final third, they couldn’t really threaten Vllaznia’s goal in the first 45 minutes.

The second half was another story. Madrid scored both of their goals in the second half; Esther González opened the scoring in the 54th minute after a genius touch from Claudia Zornoza, while Olga Carmona’s 76th-minute penalty sealed the three points.

Here are the full player ratings below:

GK: Misa Rodriguez — 6/10: Vllaznia failed to register a single shot during the match, meaning Misa had nothing to do. She had a nervous moment or two, but not much to write about other than that.

AR: Kenti Robles – 7/10: Indifferent to opposing attackers. Had a few crossovers that were dangerous. Was sharp in offensive streaks.

BCR: Kathellen Sousa — 7/10: A very assured performance from the Brazilian central defender at the heart of the defense. She was tasked with throwing long balls/diagonals to find wide outlets, but wasn’t very accurate.

LCB: Rocío Gálvez — 6.5/10: An error-free performance from Madrid’s #4. Like all the other defenders, she didn’t have much to do.

LB: Sofie Svava — 7.5/10: Was effective in attack as she made proper runs that allowed her to make crosses that created not only danger but also chances (especially in the first half).

CDM: Freja Siri — 6.5/10: Acted as the sole pivot in front of the defense and fulfilled his role without too much hassle.

MRC: Sandie Toletti — 6/10: Deployed inside right in 4-3-3, Toletti played the first 45 minutes before being released at halftime. She didn’t leave a mark on the game as we know.

MCL: Claudia Zornoza – 8.5/10: The player of the game. Zornoza celebrated his 32nd birthday with a fantastic performance. In Caroline Weir’s absence, the playmaking responsibilities fell to her and she was often the only player to stir things up in the first half, where Las Blancas failed to penetrate Vllaznia’s defence. She capped off her performance with a brilliant first assist for Esther’s goal.

AD: Athenea del Castillo — 5.5/10: It was Athenea’s least impactful display this season. She tried a lot of dribbling, but often lost her duels against Vllaznia left-back Luçije Gjini, who handled Madrid’s #22 pretty well. She was knocked out in the 67th minute.

GA: Olga Carmona — 7.5/10: Olga started as a left winger and had a good shift. Just like her counterparts, she couldn’t generate much threat in the final third. She had a much improved second half performance where she faced players with much more freedom. She both won and converted the penalty to put the game to bed.

ST: Esther González — 7/10: Esther continued her fine form in front of goal with another goal, this time to break the deadlock. She was deployed as a ‘target woman’ to swallow long balls slashed from behind. Her link-up play, however, wasn’t as prominent a feature of her display this time around, but she was more composed than ever to finish the opening goal.

AD: Naomie Feller – 5.5/10 (replaced del Castillo; 67′): Much like the player she replaced, Feller couldn’t do much from the right wing position.

CB: Ivana Andrés — N/A (replaced Gálvez; 79′): Was substituted for Rocio Gálvez in the 79th minute to end the game.

RCM: Teresa Abelleira — N/A (replaced Olga; 79′): Was substituted for Olga Carmona in the 79th minute which saw Maite Oroz play as a left winger to keep the 4-3-3 form. Tere didn’t have much time to do anything remarkable.