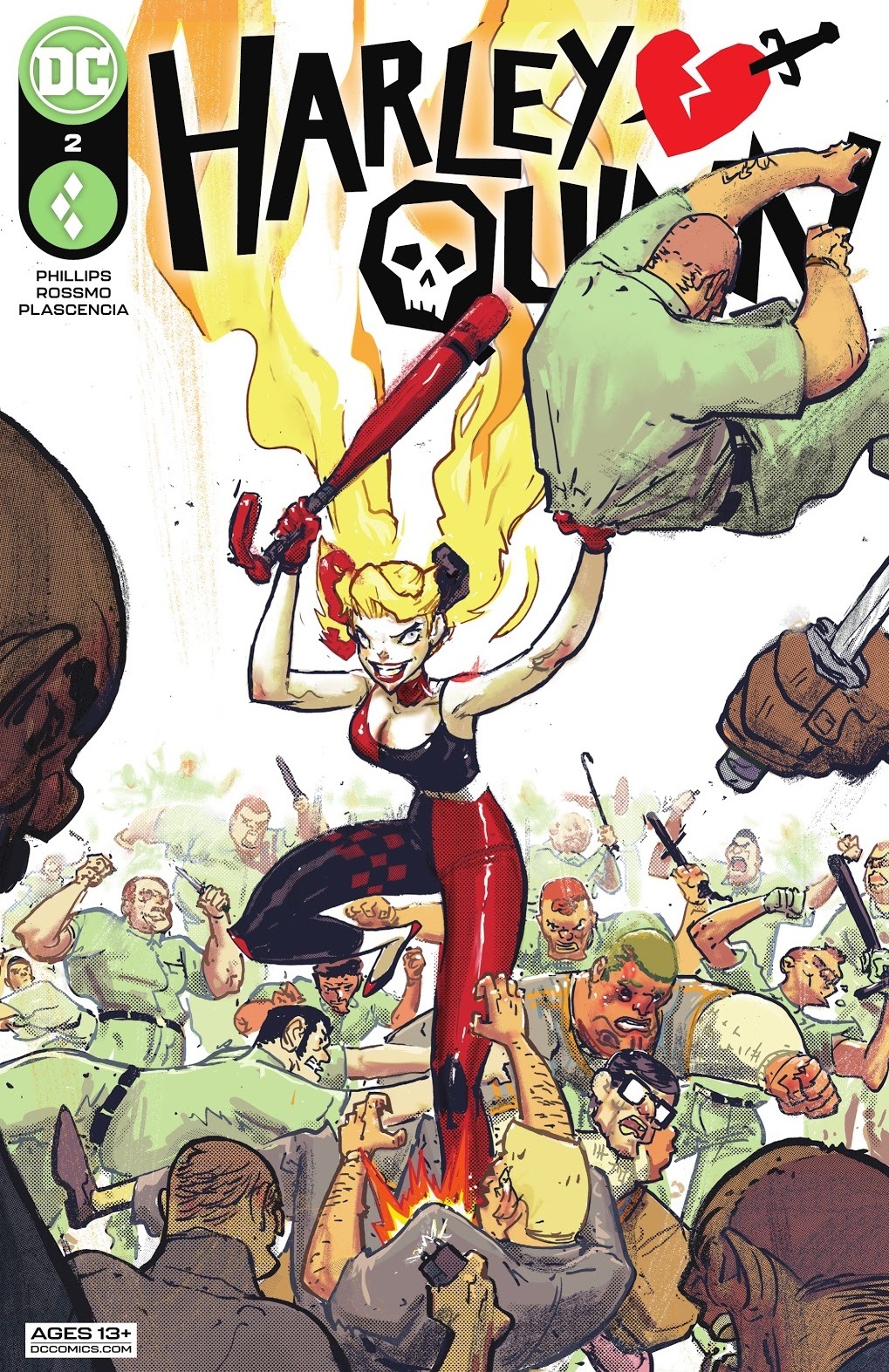 Welcome to my comic book reviews this week (April 28, 2021). I will cover Harley quinn number 2, Happy Hour number 2, The Department of Truth number 8, and more!

From DC Comics, let’s open with Harley quinn number 2 by writer Stephanie Phillips. I don’t know about you, but I appreciate the characterization of Harley in the last solo series. Phillips makes sure Harley is mature. Harley is still weird, but she feels more focused on her goal of helping those influenced by the Joker. Plus, having Dr. Hugo Strange (another psychologist) as a villain in the current arc is a stroke of genius. I can’t wait to see Harley and Hugo come face to face and psychoanalyze each other to the point of grime.

I also continue to love the art of Riley Rossmo and the colors of Ivan Plascencia in this book. I understand the duo isn’t for everyone, but that’s what I’m here for. I’m not sure what their creative intentions are, but I justify the unique art style as a glimpse into how Harley sees the world; where everything is in motion, energetic, colorful and strangely chaotic.

Perhaps this is why Hugo Strange is drawn as a towering giant and how Harley’s ponytails move a lot to complement what she is thinking or feeling at a particular moment? I do not know. But the artistic style is of course different.

Recommendation: TO PICK UP!

The Amazing Spider-Man: The Curse of the Man-Thing Number 1

By writer Steve Orlando, The Amazing Spider-Man: The Curse of the Man-Thing Number 1 continues the Orlando story of the Harrower using Man-Thing’s biological (and magical) makeup to wreak havoc. As stated in the title, the last chapter focuses a lot on Peter and makes him use Talk no Jutsu. While I’m not the biggest Spider-Man fan, I still found myself invested enough to see what would happen next. Due to the hectic nature of the story and the large number of action panels, I think Spider-Man fans will definitely enjoy reading this book. Miles Morales and other web crawlers also appear.

Take note; the X-Men arrive in the next issue and I can’t wait to see Orlando write Storm.

The Department of Truth Number 8

Writer James Tynion IV gave me a lot to think about in The Department of Truth number 8. Cole Turner keeps getting more interesting. I still have a lot of questions about why DOT chose him and what role he’s supposed to play down the line. Cole is also confused. So at least the readers and Cole have that in common.

The latest issue features a new character named Hawk Harrison. He’s the one who trained Ruby and now focuses on teaching Cole a thing or two about how conspiracy theories have the power to change reality. While Ruby handles the most superficial things, including preventing dangerous conspiracies from developing and even killing people who could harm reality (and make their deaths natural), Hawk is the guy you call to fix the altered reality. (from what I could understand).

Recommendation: TO PICK UP.

From the writer Henry Barajas, with Rahmat M. Handoko in pencils and Bryan Valenza in colors, Greycastle Helm Issue 1 begins in a very traditional D&D fashion in a world of warriors, dwarves, orcs, and more. We’re quickly introduced to the main team and what they can bring as our leaders take on undead skeletons. However, things take an interesting (and somewhat confusing?) Turn when an Aztec gods joins the narrative. It’s a good thing that I watched the Onyx Equinox animated series on Crunchyroll and got an idea about the Aztec gods that appeared in the panels of this book.

Even though you may feel indecisive about the story, the art is definitely a highlight. As far as I’m concerned, I’m interested to see what happens with the main characters as they attempt to save the dragon-like child.

This comic book also includes resources for D&D players to run a game related to the comic book. So, that’s probably something quite valuable because I’ve heard stories about how difficult it is to come up with fun new adventures featuring a deep tradition.

Recommendation: Up to you.

I was provided with a free digital copy of Happy Hour number 6 for consideration. The opinions I have shared are my own

We have come to the conclusion of the Happy Hour series by writer Peter Milligan. I don’t know how to talk about it while avoiding spoilers. Happy Hour the number 6 leaves room for the return of this series. I would like it. I enjoyed reading Milligan’s take on human emotions and how being too happy or too unhappy is not the answer. You have to find a balance. But that’s easier said than done because humans experience a lot more emotions than happiness or sadness. Everyone is such a mess!

I don’t know if it was my university training in psychology that made me gravitate towards Happy Hour and the current Harley quinn solo series, but hopefully more people will consider choosing both titles because I think they offer something different, enjoyable, and engaging in today’s comic book landscape.

I was provided with a free digital copy of Stealth Hammer number 1 for review. The opinions I have shared are my own.

I talked about the Stealth Hammer Kickstarter in August 2020. The campaign was a success for writer Ryan Drost. The first issue opens with the main character Jami Taylor telling his story about obtaining superpowers and the immediate experience of his first fight as an evil scientist. I think this indie comic for all ages has what it takes to appeal to many, especially given the genres it encompasses. While there are giant robots and gadgets, the tale also includes supernatural mythology. So there is something for different types of readers. Personally, I love these mashups.

There are two stories in the first issue. â€œThis is how the story beginsâ€ shows Jami who obtains his powers after an â€œaccidentâ€ in his father’s laboratory. Although I enjoyed seeing his father supporting me, it is clear that he is hiding information from his daughter. The well-detailed art style of artist Joel Jackson and colorist Ross Huges is quite young.

The second story, “Adversity is Necessary,” moves forward a bit, showing Jami roaming a fantastic land, with a gnome as a guide, in search of answers. During her expedition, she meets the evil Marzanna (I love her character design) and learns how unprepared she is to face such an enemy.

Drost is currently looking for an editor to take over Stealth Hammer mini or continuous. Carol & John’s Comic Shop (the largest comic book store in the Cleveland area) bears the title.

You can read Jessica’s review on Robin number 1 here.

What comics have you read this week?

Farid has a double master’s degree in psychology and biotechnology as well as an M.Phil in molecular genetics. He is the author of numerous books including Missing in Somerville and The Game Master of Somerville. It gives us insight into comics, books, TV shows, anime / manga, video games, and movies.

Read our before commenting.
Do not copy our entire content from other websites. Links are encouraged.
Copyright Â© The Geekiary