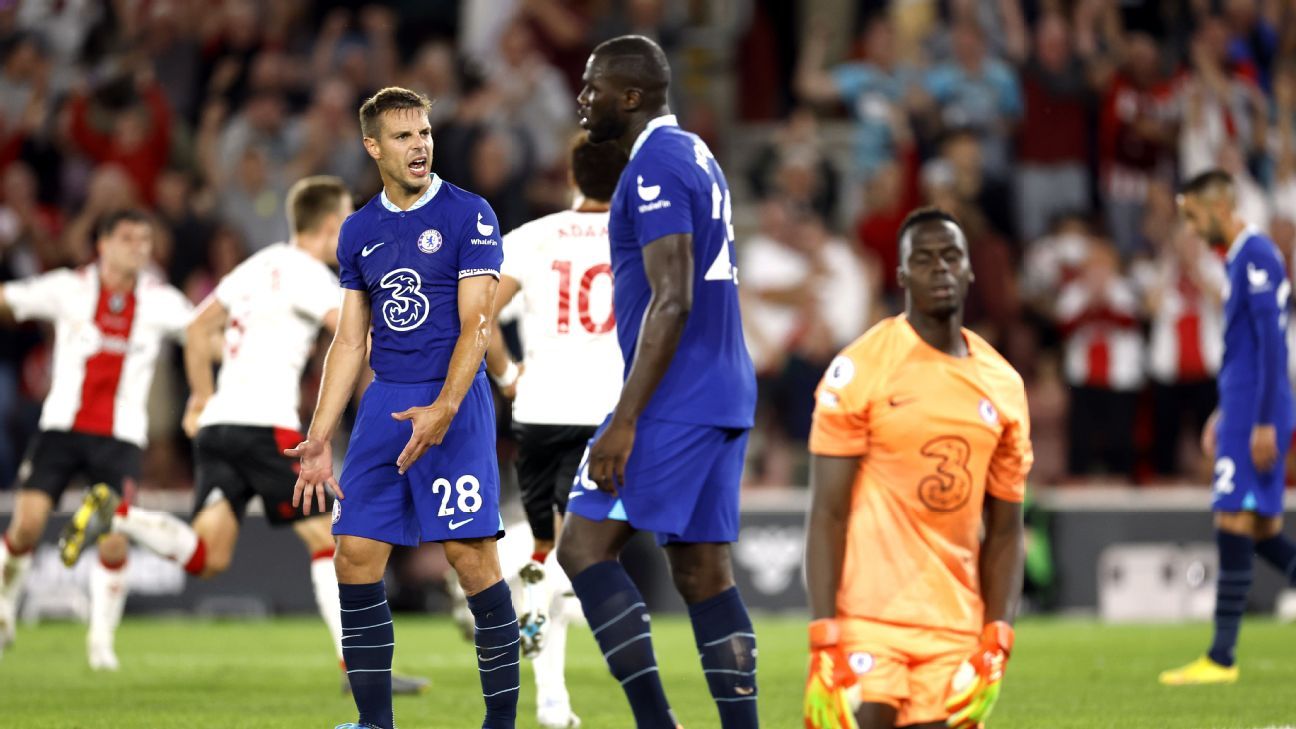 Chelsea suffered a 2-1 defeat at Southampton as early season struggles continued for Thomas Tuchel’s side.

Although Raheem Sterling put the Blues ahead in the 23rd minute, the Saints equalized five minutes later with 18-year-old Romeo Lavia’s spectacular goal.

It was then in first-half stoppage time that the home side took a lead they would not relinquish thanks to a deflected effort from Adam Armstrong.

1. Will the loss boost Tuchel’s call for signing?

It was a bad night for Chelsea. Southampton recorded their first home win against the Blues since March 2013 and they enjoyed it too. Raheem Sterling opened the scoring after a brilliant start but as soon as Romeo Lavia equalized with a fine strike five minutes later, Chelsea started to play into themselves.

Disjointed in midfield, blunt in attack, this evening called into question Thomas Tuchel’s decision to use a 4-2-2-2 system which did not seem to suit the players at his disposal. If this is how he wants to play in the future, Chelsea really need to be active in the transfer market.

They are considering bringing in a striker and winger – Pierre-Emerick Aubameyang, Anthony Gordon and Wilfried Zaha are among their targets – and a display like this, not their first mediocre outing of the campaign, should whet the appetite. spirits. two days before the transfer window.

Co-owners Todd Boehly and Behdad Eghbali were both present here to witness it first hand. This could end up being a good thing in the long run.

Tuchel’s success at Chelsea has been built on defensive resilience. In his first 50 games as head coach, the Blues have kept 31 clean sheets, more than any other side in Europe’s top five leagues over the same period. So far this season they have failed to record a single shutout, conceding eight times so far – a record only better than four clubs (Southampton, Crystal Palace, AFC Bournemouth and Leicester City).

There were extenuating circumstances here given that Reece James was out through illness, and Kalidou Koulibaly and Marc Cucurella are still adjusting after their respective summer moves from Napoli and Brighton. But much of Tuchel’s success came with a back three and in a back four Thiago Silva often looked exposed and combined with Cesar Azpilicueta on the right side of defence, Chelsea too often looked vulnerable in that channel .

Wesley Fofana is due to complete his £75million move from Leicester in the coming days – it’s a big ask for a 21-year-old to provide immediate stability, but the hefty price tag portends an immediate impact.

3. The mysteries of Ziyech and Pulisic deepen

Hakim Ziyech has made a surprise first start of the season on the south coast, something more unexpected given that Ajax Amsterdam are in the midst of negotiations to try to bring him back to the Netherlands. Ziyech was thrown into a central midfield role following Conor Gallagher’s suspension and N’Golo Kante’s hamstring injury and didn’t look comfortable, although he lasted longer than Ruben Loftus-Cheek, who was taken off at half-time for Mateo Kovacic.

Christian Pulisic was granted a 24-minute outing as a substitute, his fifth successive appearance on the bench, but this came at right-back, a position he would hardly call his best. Chelsea are so far reluctant to allow Pulisic, who has grown frustrated with the lack of regular playing time in his favorite role. An 80th-minute booking for a cynical foul barely lightened his mood in a disappointing cameo. In fact, the evening summed up the unease both players find themselves in with the fast approaching deadline.

Herculez Gomez says Christian Pulisic failing to get out of Chelsea is terrible news for the American.

He became the first player born in 2004 to score a Premier League goal, but his performance was much more than that: resilient and combative out of possession, thoughtful and incisive with it.

Beaten far too easily by Lavia for Adam Armstrong’s goal and failed to inject pace into Chelsea’s game. Replaced with 24 minutes to go.

The hearts of the Saints fans melt for Romeo.

After the game: What managers, players said

“It’s not enough to win away matches, it’s not enough to play 20-25 minutes at the level we want. It’s too easy to throw us off balance, to fight us, to confuse us “It’s too easy. It happened against Leeds. We have to understand why and find solutions.” – Chelsea manager Thomas Tuchel, to the BBC

“We’ve won away once at Chelsea since I’ve been here, that was four years ago, but at home not for a while and it was time to take something.” — Southampton coach Ralph Hasenhuttl

– Romeo Lavia has become the first player born in 2004 to score in the Premier League. At 18 years and 236 days, the Belgian youngster is the fourth youngest Saint to score a Premier League goal.

Chelsea: The Blues return to Stamford Bridge this Saturday to host West Ham United before opening the Champions League group stage at Dinamo Zagreb next Tuesday.

Southampton: The Saints visit Wolverhampton Wanderers at Molineux on Saturday.

How to protect your business from cybercriminals?