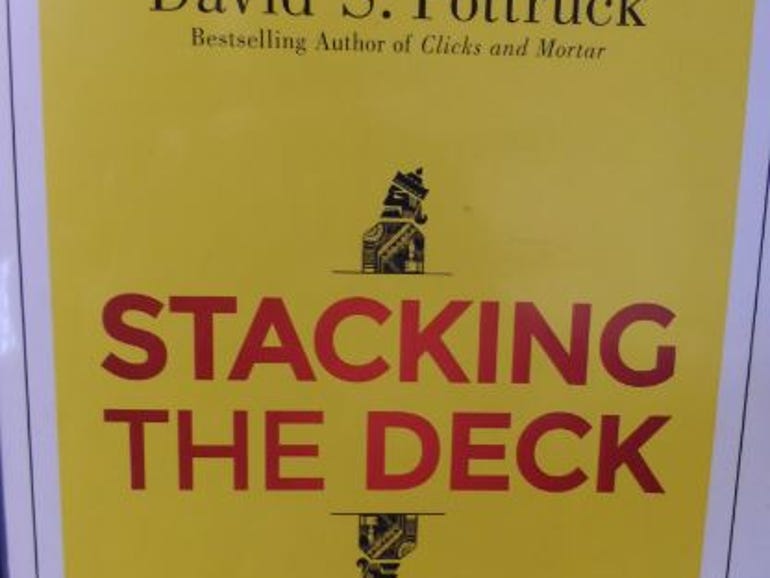 I had the chance to read David Pottruck’s new book “Stacking the Deck” a few weeks ago. He focuses on driving big change – something that many IT project managers and systems integrators should know a lot about.

I have a healthy appreciation for what it takes to change an organization. I’ve been through many great systems projects and learned a ton of change lessons the hard way. But I’ve also had the pleasure of working with a number of great change professionals who really know how to make things happen. Their ideas and methods have been great.

I have also worked with people who have done nothing but lip service to change management or who have tried to apply a stereotypical approach to change without really understanding what the business / client needs. . It turns out that change is often personal and difficult.

“Stacking the Deck” really does a really good job of breaking down the steps behind a big change, but more importantly, it does so while exposing the all too common reactions executives will have about leading the change. For example, while an executive sponsoring a large initiative may know that the project is important to the business, not everyone in the business feels the same sense of urgency or need. The natural reaction of many employees is to ignore the project and maintain the status quo. As I learned, you have to start a fire so that people see that you are serious about this project. And, it takes ongoing, focused communication to make sure they â€œgetâ€, engage, and stay on board.

While it seems so obvious, it doesn’t always happen in real life. What many leaders and project teams need is a way to understand the change they are initiating, the methods that will help them achieve their goals, and the techniques to sustain the effort. Mr. Pottruck’s book does a good job of dissecting change into relevant and actionable steps.

In my career as a consultant, I have come across a few change management methodologies. These tools were dry and impersonal. They lacked a real human face to a process that concerns only humans and their sometimes stubborn or irrational reactions to new things. This book reads well because it is full of examples that convey the essence of the problems and the understanding of why particular methods are needed. That personal touch is what makes the book work so well. It also makes the book something good project managers will want to check out again.

If you’re about to embark on a big project (for example, integrating a merge), you need an easy way to see and plan for change. Get this book.

Vinnie Mirchandani has just released his fourth book “SAP Nation”. The book quantifies the enormity of the SAP ecosystem on a global scale. It also presents a detailed history of the company, its customers, influencers and integrators / contractors that exist (and thrive) thanks to SAP.

It was interesting reading this book because Vinnie and I have followed the same paths throughout our careers. We both ran software intelligence groups at the consulting firms we joined after college. We even did a dot-com together and we’re both part of Enterprise Irregulars – an influencer group made up of some of the toughest analysts / thought leaders / bloggers in the business world. We even shared a scene several times. And, next week, we’ll be panelists on a Workday Predict & Prepare TV show. Over the past few years, Vinnie has clearly been more of an advocate on the buy side and I’ve done more work on the sell side. However, to say that we know each other well would be an understatement.

I believe Vinnie has been thinking or working on this manuscript for years. In many meetings with SAP executives that he describes in his book, I was also present. His account of the events and jokes of the leaders seems true to me even though some interactions took place years ago.

Vinnie’s account of the SAP story seems pretty accurate. It guides readers through the rise of SAP in the 1980s and 1990s. It provides a timeline of failed implementations. And he obtains the justification of his points from a large number of references. To his credit, Vinnie has done a lot of research to get a complete picture of the SAP ecosystem and where it is today.

I won’t spoil the surprise of readers of this book by identifying the size of Vinnie’s ecosystem, but I will tell you it would equate to the GDP of a large country. Interestingly, this ecosystem does not have an ambassador or an embassy.

SAP Nation helps readers see the software vendor as a large vendor that:

However, I have two concerns with this book. The first is that I think Vinnie can judge decades of SAP history based on a set of modern criteria. What SAP has or has not done for several decades should be assessed against the needs / wants of buyers then and not today. When so many companies bought SAP in the mid to late 1990s, many did so because they wanted a year 2000 solution. Others bought SAP to achieve global economies of scale. I remember a speech given by a CIO in 2009 in which he admitted that his company spent around $ 1 billion on the implementation of SAP software, but the software allowed them to free up $ 1.7 billion. dollars in working capital within 7 months of conversion by eliminating redundant inventory. The return on investment for many companies in their initial SAP implementations was often significant. Did these companies then make a good business decision? I certainly believe so.

Advance time until today and the decisions made in the 1990s seem naive or strange. Yes, customers now have a choice of shared cloud solutions instead of just an on-premises client server solution. Integrators should also have built more efficient data centers and implementation methods. Vinnie is right to point out the sometimes freezing rate of cost improvement in the on-premise ERP ecosystem. And, he’s also right to warn suppliers and integrators to pull themselves together or deal with dropping out of wholesale customers.

This brings me to my second wish for this book. Reading this historical account of the SAP world, I felt that SAP, its partners and its customers needed a lot of changes. But, just as the book reaches its climatic climax, it sort of comes to a halt. What are the mitigation measures that clients need to take? Where is the revised game plan for SAP to execute? What is the 10 step plan for integrators and contractors?

The irony of reading this book and Pottruck’s Stacking the Deck back to back is immense. I wondered what Vinnie’s book would look like if it tackled the path of change ahead for the ecosystem and not just telling us about the path that has already happened.

SAP Nation is a good book of historical importance detailing the evolution, size and actors of the technological world that is SAP. It certainly succeeds in getting the reader to think about what to do with their software, their software company, or their practice. Specifically, I think it would force any user, vendor, or software implementer who is still using legacy application code to swallow.

I totally agree with Vinnie that times are changing dramatically and businesses that are slow to change will be in trouble. His book should bother a lot of old school salespeople, because the same story and the same approach to researching their business would lead a reader to many of the same conclusions. Software implementers and contractors should really take his book to heart because most of that economy is spent with them. Data centers, staff, etc. that exist in this part of the ecosystem may have done a great job in the past, but it was then and it is now. Cloud and multi-tenancy will shake up the world of integrators and contractors, but too little progress is happening on this front to radically re-imagine these companies. And software customers will have to rethink what software they use, how it’s updated, who implements it, etc.

Perhaps the best feature of the book is to remind readers of the fragile and ephemeral state of application software. Long-standing empires are a rarity in the app space. Technology is changing and buyers are moving on. Today we are experiencing one of these changes and woe to all the players in the ecosystem who do not take the change into account. Buy this book just for that.

A casualty in the battlefield of partisan Amazon book reviews

Book Reviews: Conclave, Postcards from Greece and All We Shall Know | Books | Entertainment