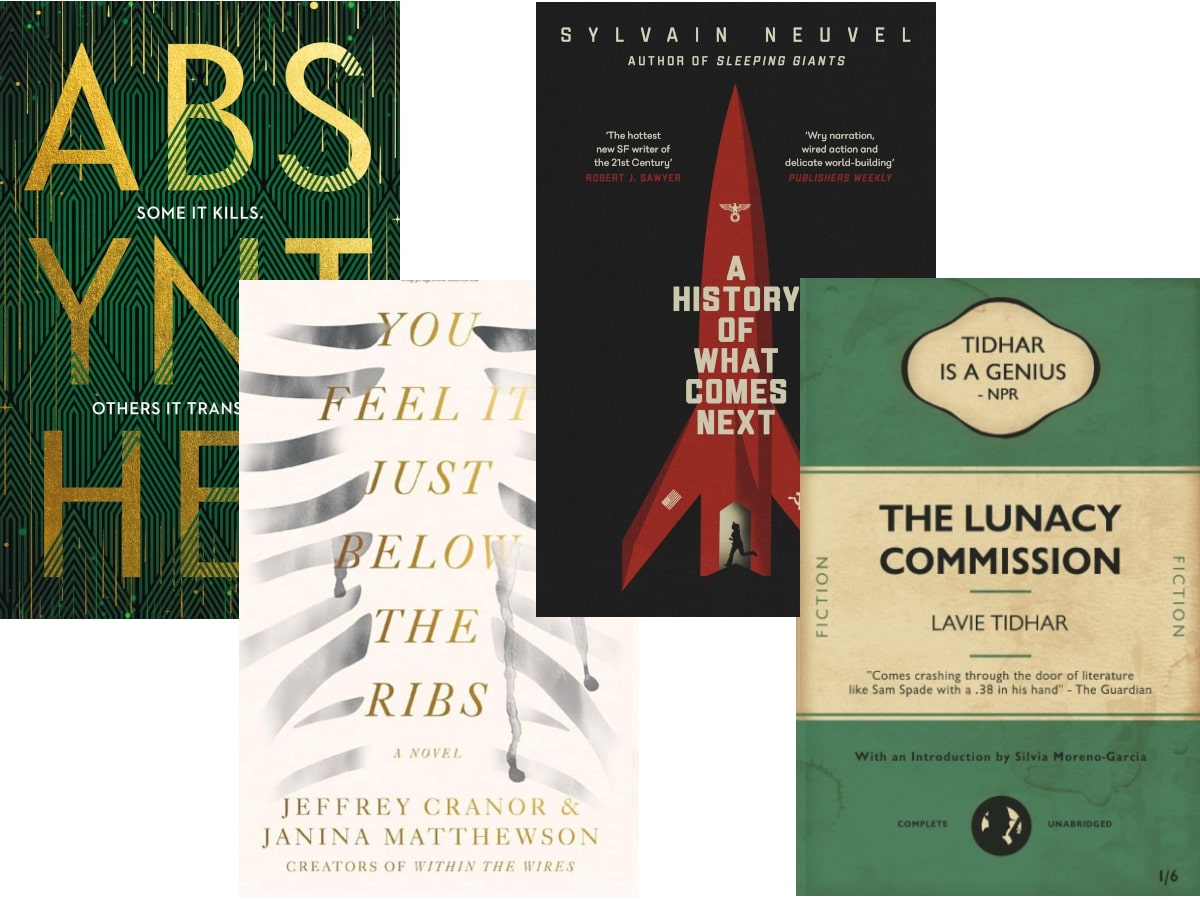 4 stories of wars that never were – Book Reviews

Quite coincidentally, four books I’ve read in the past few weeks have featured wars that never were. I hadn’t planned it that way. 2 were review copies sent to me, each based on an interesting promise. The other 2 were books by authors I admire, so I bought copies of their latest work. So here is my review of 4 stories of wars that never were.

All of this becomes evident as the novel progresses. Absynth features spells and speakeasies; it has a Cthulhu feel but without the monsters in the depths. Instead, we’ve altered realities reminiscent of The matrix. The book has great backgrounds and I think it would transfer very well to the screen.

The plot is extremely meandering, as you would expect for a novel full of characters who can confuse people’s perceptions. It’s a little heavy in places. Nonetheless, an intriguing cast of heroes, a great premise, and a truly dastardly villain make Absynth worth a look.

You feel it just below the ribs takes place during and after another fictional war. In this case, the war did not end in 1918. Instead, it dragged on, eventually engulfing the entire world.

The book is presented as being a manuscript of an underground publisher. They claim the narrator is unreliable, but wanted to put the story in the hands of the reader. This is the autobiography of Miriam, who was a young girl at the start of “The Great Reckoning”; an immense sprawling war that covered the globe and decimated its population.

Myriam recounts her life. Her survival during The Great Reckoning and her place in the world as she tries to recover in the apocalyptic aftermath.

I’m not going to lie, I found this book slow at times. It is an in-depth autobiography of a life, albeit tumultuous, but also often quite boring. Or at least as told by our narrator. That’s not to say it’s not a powerful novel. You feel it just below the ribs has a neat device at its center which in turn allows it to pose its central philosophical enigma.

Miriam learns a relaxation technique that allows her to manipulate and even erase memories to help relieve suffering. This begins a chain of events that results in a radical reshaping of the nature of the family. In a curious inversion of “Those who forget the past are doomed to repeat it,” society attempts to erase memories of trauma from the inhabitants of the globe. The goal is to build a society where people will not remember the evils inflicted on them, in the hope that this will reduce the possibility of conflict.

The law of unintended consequences of course reigns and Miriam tells the story of a broken society in a different way.

You feel it just below the ribs is a thought-provoking read that challenges the very fabric of everything we hold dear on GeekFamily blogs; the nature of the parent-child relationship.

A story of what comes next by Sylvain Neuvel

I really wanted to read A story of what comes next after taking advantage of Sylvain Neuvel Themis files so many series. Again, we are treated to a war with alternate events, or at least an alternate explanation for them. The novel is mainly set during and after World War II and focuses on the space race.

Mia and her mother are exceptional people, from exceptional people. Their primary mission is to return home somewhere among the stars. It means persuading mankind to discover the technology to visit space. Much of the novel is devoted to Mia traveling through Nazi Germany trying to help Werner Von Braun avoid the clutches of the Russians and guide him into the hands of the Americans. She needs him to launch the American space program.

Along with that, we’re drip-fed snippets of the backstory of Mia’s exceptional ancestors and the terrible forces that hunt them down.

Story of what comes next is an entertaining alternate history. Mia is an endearing narrator who is as funny as she is calculating. There’s a great mix of action and science in the book, as well as a meditation on the nature of evil and the pragmatic nature of forgiveness and acceptance. The book is the first in a new series (Book 2 will be released later this year) and I can’t wait to see how Mia fares during the Cold War.

The madness commission by Lavie Tidhar

I discovered The madness commission while writing my review for Tidhar’s The Hood at the end of last year. These are 5 short stories based on the same principle used in Tidhar’s masterpiece A man is dreaming. The book is worth buying for the “classic” retro cover alone.

In these books, a Jewish writer, trapped in a Nazi ghetto, imagines an alternate world as an escape from his nightmare. It tells stories of a world where Hitler was ousted from power and fled to the UK, where he lives in the shadows as a private detective. In this fictional United Kingdom, Oswald Mosely has come to power and fascism is taking over England. In a 2022 where divisive politics, isolationism and undeserved exceptionalism reign over English politics, A man lies while dreaming and The madness commission has never felt so relevant. I invite you to read them, or indeed anything by Lavie Tidhar, who is a very talented writer.

Disclosure: I received copies of Absynth and You feel it just below the ribs to write this review.

Like? Take a second to support GeekDad and GeekMom on Patreon!

Review: The Disease and the Gory Details | Book reviews and short stories